Man suspected to be coronavirus case dies in Madhya Pradesh 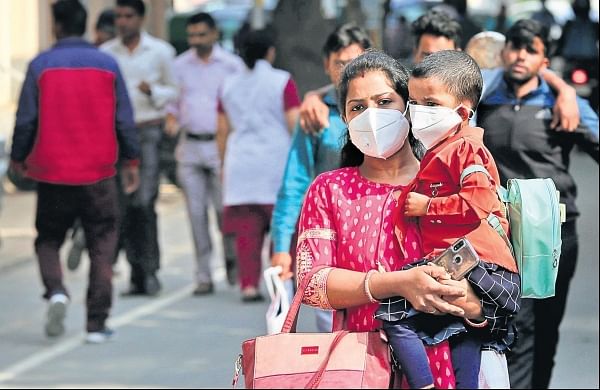 BHOPAL/INDORE A 47-year-old man admitted to a hospital in Madhya Pradesh's Indore after being suspected of coronavirus has died, an official said, adding the man has no travel history and his test reports are awaited

COVID-19 cases continued to rise in Madhya Pradesh with six more patients -- five in Indore and one in Shivpuri -- testing positive on Thursday and taking the number to 21, the Health Department confirmed.

There have been two deaths so far. Both victims were from Ujjain who succumbed to the infection during treatment in Indore.

While a 47-year old patient suspected of corona admitted to an Indore hospital died in the early hours of Thursday, a 65-year-old woman who had no travel history for over a month had died on Wednesday in Indore government hospital.

Shivpuri Chief Medical and Health Officer (CMHO) A.L. Sharma said a 26-year-old youth from Khaniyadhana, about 80-km from the district headquarters, tested positive for the infection on Thursday. This was Shivpuri's second case. The man had gone to Hyderabad on March 13 and returned to Shivpuri two days later, he said

Among the five new cases in Indore, two are women, a government medical college spokesman said.

Sharma said family members of the coronavirus positive man have been told to quarantine themselves at home and they will be monitored by health workers. The residents of victim's locality have been told to self-quarantine under medical supervision. The patient sought medical help through a video on social media.

Sharma also informed that the mother and father of a 30-year man, the first coronavirus positive case in Shivpuri, tested negative in the medical reports received on Thursday.

So far, 10 coronavirus cases have been reported in Indore (including deceased woman of Ujjain), six in Jabalpur, two each in Bhopal and Shivpuri and one in Gwalior, they said.

No positive case has been found so far in Chhatarpur but the COVID-19 patient from Gwalior had travelled to Khajuraho in Chhatarpur, they said.

As a result, curfew was clamped in Rajnagar and Khajuraho towns of Chhatarpur district, officials said.

Government MGM Medical College Dean said the patient's test report was not received till noon. He was referred from Ujjain civil hospital on Wednesday with breathing problem, fever and coughing, the dean said.

The first death in the state due to the virus occurred when a 65-year-old woman from Ujjain who was admitted to the government MY hospital died early on Wednesday. At present, 19 are admitted in different hospitals of the state.

Among the latest five new cases found positive in Indore, two are women and three men from different localities of the city, a spokesman of Government Medical College said.

Curfew has been in force in Indore and Ujjain since the cases were reported on Wednesday.

Earlier, six positive coronavirus persons in Jabalpur, two in Bhopal including a journalist and his daughter and one each in Gwalior and Shivpuri were found in the state, official sources said.