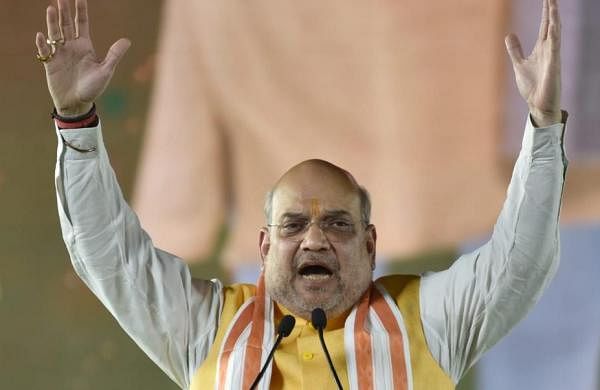 NEW DELHI: Union Home Minister Amit Shah lauded the Supreme Court verdict dismissing the plea challenging the clean chit given by SIT to then Gujarat Chief Minister Narendra Modi and several others in 2002 riots that took place in the state. He said that the truth had come out, "shining like gold."

He also said Narendra Modi had endured pain for the last 19 years without speaking a word and followed "Lord Shiva who swallowed poison and held it in his throat."

Shah sought an apology from people who leveled "politically motivated" allegations against the then Gujarat Chief Minister following the 2002 riots.

"The Supreme Court has dismissed all allegations, it has said why allegations were levelled. You can say in a way that allegations are politically motivated, this has also been proved. It was a battle of 19 years, such a big leader without saying a word, endured pain like Lord Shiva drank poison and continued to fight (sabhi dukhon ko bhagwan Shankar ke vishpan ki tarah gale mein utarkar sehen karkar ladta raha). Now in the end when the truth has come out like glittering gold, it has come out with full shine, then it is natural to feel joyous (anand hi hoga)," the Home Minister said.

"I have closely seen Modiji enduring this pain, facing the allegations despite being on the side of truth and because the judicial process was underway he did not speak. Only a man with a strong heart can do this. The interview we are doing today, I could have done in 2003 as Gujarat Home Minister and later as party chief. But till the judicial process was completed, Modiji did not say anything so that there was no influence. He endured all this silently," he added.

The Supreme Court on Friday dismissed the plea filed by Zakia Jafri, widow of former Congress MP Ehsan Jafri, challenging the clean chit given by the Special Investigation Team (SIT) to then Chief Minister Narendra Modi and several others in 2002 Gujarat riots.

Ehsan Jafri was among 69 people killed during the violence at the Gulberg Society in Ahmedabad on February 28, 2002. A bench headed by Justices AM Khanwilkar said that it finds the appeal as devoid of merit.

"How constitution can be respected in a democracy, Modiji has kept an ideal example before people in politics. When he was questioned, there were no demonstrations," he said.

The minister said according to the court judgement, the state government made all the efforts to control the Gujarat riots and had taken the right decisions at the right time.

"It (June 24 SC judgement) is very significant. Manner in which an attempt was made to victimise my party's tallest leader, Court tore it down. I believe this judgement is a matter of pride for all party workers, false allegations against our tallest leader have been dismissed," he said.

"The court also said that the state government had controlled the situation with less damage. The state government had properly followed the witness protection scheme. The judgement consists of around 300 pages in which the Supreme Court has explained every point. The court has also said that Modiji had held a lot of meetings, made appeals for peace. Today, the truth has won and Modi ji is victorious," added Amit Shah.

He said wrong allegations had been levelled against a global leader. After 58 pilgrims were burnt alive on the Sabarmati Express train at Gujarat's Godhra Railway Station on February 27, 2002, riots broke out across the state in which more than 1,000 people were killed. The SIT, appointed by the apex court, conducted the investigation into the case and gave a clean chit to then Gujarat chief minister Narendra Modi, other top politicians and bureaucrats. The Gujarat High Court's order dated October 5, 2017, also upheld SIT's clean chit to Modi.

Shah, who handled various portfolios like Home, Law and Excise etc during Modi's tenure as Gujarat CM, said that the Gujarat government gave its consent for the formation of SIT as there was nothing to hide.

"SIT was not ordered by the court. An NGO demanded SIT and the court, for sake of asking, asked our lawyer and our government said we have nothing to hide then SIT was constituted. We did not have any objection to it. Gujarat government's consent is on the record. The court also said in its judgment that SIT was demanded by an NGO and the Gujarat government gave the consent," he said.

"We could have debated this but why? Because we had nothing to hide. Now when the judgment has come, it is clear...the names of a police officer, an NGO, and some political elements also mentioned in the verdict have proven that this troika propagated lies to create sensation and false evidence was presented. They gave wrong statements to SIT which were dismissed as lies in front of the court. The court has said that the government did everything to control riots, the chief minister repeatedly appealed for peace, and riots after the train incident were not orchestrated," he added.

Earlier in 2019, the Nanavati-Mehta Commission Report on the post-Godhra riots, which was tabled in the Gujarat assembly, gave a clean chit to then Gujarat CM Modi. The report mentioned that the riots were "not organised".

Asked what then Gujarat CM Modi could have done at that time, the Home Minister said Modi had done everything and there was no delay about any action on the part of the Gujarat government and police had also resorted to firing to control the situation.