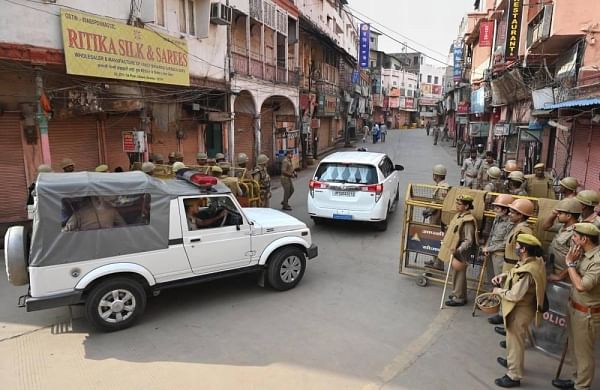 LUCKNOW: The report of the survey conducted on Gyanvapi mosque premises on May 14-16 reportedly makes a mention of a ‘cylindrical structure of black stone’ found in the middle of ‘wuzu’ (ablution) pond which resembled a ‘Shivlinga’.

The court had appointed commission to conduct the survey on mosque premises while hearing case no. 693/2021, Rakhi Singh vs UP government, where the plaintiff had sought permission for daily worship of Maa Shringar Gauri situated on mosque premises.

As per the highly placed sources, the court commission has reportedly made a clear mention of the survey report about the ‘structure’ of black stone found in well-like structure in the centre of wuzu pond of Gyanvapi mosque and it looks like a Shivlinga.

The other details about the cylindrical structure in the report say that as soon as it became visible to the survey commission, the plaintiffs and their lawyers started claiming it as ‘Shivlinga’ while the mosque authorities termed it as a fountain which has been lying defunct for 12 -20 years.

As per the sources, the report mentions that the mosque staff failed to give a definite time period for which the fountain was lying defunct. Initially, they claimed that it was not working for the last 20 years but then came down to 12 years.

Even there has reportedly been a mention of how the mosque staff failed to make it operational when asked to do so, said the sources adding that a white layer was found on the top of the cylindrical structure.

The sources also claimed that reported talked about a layer -- half an inch thick – and a thin hole of 63 cm depth was noticed at the centre of the cylindrical structure.

The report also mentions that despite search, no arrangement for attaching water supply pipe to operate the fountain was found therein.

The sources also claimed measurement of cylindrical structure -- 2.5 ft in height and 4 ft of radius at the base—was also mentioned in the report which stated that the white layer of 9 inch radius (which was divided in five parts) was fixed from outside at the top of the structure.

The sources also claimed that as per the report, when the layers of moss deposited over cylindrical structure were removed, the colour of stone was found as black and it looked was like a ‘Shivlinga’.

The report also reportedly contains the ground-plan, zig-zag cuts inside domes of mosque and the main mandaps which matched the map of ground plan of Aadi Visheshwar temple as printed in a number of books, said the sources.

More specific details of structures and carvings have also been reportedly mentioned in the report. During the survey, a ‘swastik’ was found on inner wall near the south pole of the main dome.

Symbols of three ‘damroos’ were reportedly spotted at the main gate of the mosque.

In the north-west direction, a 15 ft x15 ft basement was spotted and it was reportedly covered with debris. The stones lying in the debris had images resembling the architecture of north Indian temples.

The sources also claimed that the survey report referred to a three ft deep pond having 30 taps all around it. At a distance of 8 ft 3 inch from the pond, an idol resembling ‘Nandi’ was reportedly spotted by the surveyors.

Moreover, the images of trishul, snake, bells, betel leaves, elephants, bases for keeping idols of deities were also reportedly found during the survey as the report mentioned, said the sources.

Meanwhile, the report submitted by sacked advocate commissioner Ajay Kuamr Mishra of the videography survey conducted by him on May 6 and 7 also mentioned that many signs resembling architecture of north Indian temples like lotus, snakes and idols were reportedly evident on western wall of the Gyanvapi mosque.